NEWS AND AWARDS IN NORTHERN VIRGINIA 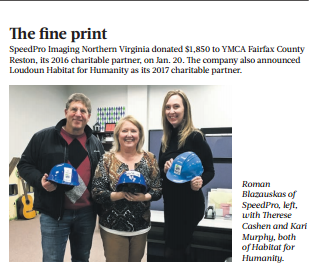 News:  SpeedPro Northern Virginia celebrated its grand opening by unveiling an annual charitable program through which the company will donate a portion of its gross profits to a Northern Virginia charity. For its inaugural year, SpeedPro NOVA selected Loudoun Interfaith Relief, a nonprofit providing emergency food assistance, as its charitable partner.

Luisa Quintero
Ashburn, VA
Very nice quality. Easy to use and durable.
Report a concern
C.S.
Arlington, VA
Customer service was fantastic, and the installers were efficient and did a great job!
Report a concern
Karen Roche
xx, VA
My beach house sign looks amazing. The process was seamless and so quick! Shawn and her team were amazing!
Report a concern
P.M.
Herndon, VA
Kim is friendly and easy to work with. We are very satisfied with the results, turnaround time, and the price.
Report a concern
L.T.
Leesburg, VA
we have been working with Speed Pro for our business needs and have always been happy with the quality, customer service, and timeliness. Thanks!!
Report a concern
Greg Miller
Ashburn, VA
I requested a fast turnaround on a banner and had it for an event that was just days away from occurring. The phone call to request the order was handled professionally. Everyone at the shop was very nice - and so were the two dogs hanging out in the lobby Greg
Report a concern