Touchless NFC Tech in Your Business

What is NFC Technology? 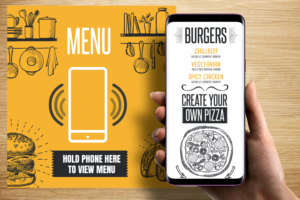 We do just about everything on our phones now a days. From interacting with friends and family to banking and even finding a home. It is no wonder then, that businesses have included digital marketing into their business strategies. While it may seem that traditional advertising is not as viable as digital, that is not necessarily the case. Out of Home advertising such as signage on bus stops, billboards, and posters are still a great way to reach your audience. NFC Technology is a bridge between traditional and digital advertising. NFC allows customers to interact with traditional advertising in a whole new way.

NFC stands for Near-Field Communication and is similar to RFID (Radio Frequency Identification). Both use radio waves to send signals, however RFID works at a longer distance than NFC. NFC only works at a maximum of 4 inches. RFID tech has been used for years to keep track of inventory and for keycards. You may have seen RFID stickers placed on products in a store. RFID and NFC chips both have storage memory, a radio chip and an antenna. NFC chips do not have a power source built in and instead use magnetic induction to draw its power from the device reading the chip. You can program the chip to perform a variety of tasks on the receiving device, which will most likely be a phone. Business owners can benefit from using NFC in their marketing, and it’s surprisingly inexpensive! 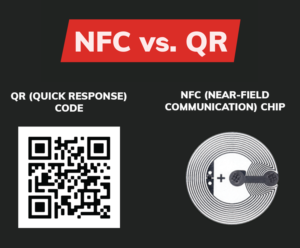 You may be familiar with QR codes, which stands for Quick Response, and wonder why someone would need an NFC chip if they could use a QR code. We’re going to outline what the differences are in using either a QR code or an NFC chip. Simply put, a QR code is a barcode and was originally developed for the Japanese auto industry. During QR’s public early days, users were not familiar with what they were or how they worked. Those who did understand it, found it inconvenient due to needing a 3rd party app to scan them. Now, most phones have the capability to read the codes without installing an app.

While QR codes can be a great tool, they do have their limits. QR codes are normally used to take the user to a specified URL page. NFC allows you to take a wide variety of actions that include: opening URLs, sharing contact information, make calls, download files, and more. Aside from the wide range of actions NFC chips have, they can be edited. When a QR code is created, it is normally used in print, which does not allow for any changes to be made. If the URL the user is directed to needs to change, a new QR code must be printed. NFC chips are easy to both program and edit with an app.

The NFC chips can be left open, locked, or password protected, which makes them the more secure option. If printed, QR codes also risk being damaged or faded by the sun, which can cause them to stop working. NFC chips can be placed behind poster and are less prone to becoming damaged. Now that we know how NFC chips work and how they compare to QR codes, we can explore uses.

NFC in Your Business

If your business takes payment using options like ApplePay or touchless credit cards, you’re already using NFC technology! This is one of the most common uses for NFC in businesses, however, it can be used quite well in other areas. We are currently in the middle of a pandemic, and the appeal of “touchless” technology has never been more relevant than now. Restaurants can use NFC technology to open digital menus on their customers’ phones. This eliminates the need to hand them physical menus and possibly increase the spread of the virus. While many of us have made the shift to working at home, those who are still meeting people may not feel safe receiving a business card. By using NFC, you can send and receive contact information through a virtual business card!

These solutions are not bound by pandemic time, however. Grocery stores could use NFC to give their customers coupons digitally and reduce the waste that comes from clipping paper coupons. Healthcare providers could use NFC to send their patient to a site where the forms can be filled out digitally. This reduces paper waste and error from illegible writing. NFC chips can even be placed on products themselves to give consumers a chance to learn more about them. Advertising agencies have also adopted the use of NFC in their campaigns. Lexus placed NFC chips on their print ads, inviting customers to demo their Lexus GS 2013’s Enform App Suite.

With such amazing features, it may seem pricy to use this in your small business. NFC chips are actually very inexpensive and easily accessible! SpeedPro LA North offers Smart Signage, which combines our great signage solutions with the power of NFC Technology. If you’re interested in using NFC tech in your business and aren’t sure how? We can help! Check out our Smart Signage page, or call us at (818) 243-1872!