With a print width of over 3.2 meters (approximately 128″), the Anapurna H3200i can print banners up to 10ft high by 120ft wide or swiftly print panels for trade show exhibits with fantastic speed and amazing resolution. This printer adds to SpeedPro’s array of latex and eco-solvent printers, replacing the previous UV flatbed. With the increased speed and capacity, SpeedPro of SF Peninsula can handle an even-larger workflow while maintaining their leading customer service and quality.

The :Anapurna printer line is manufactured by Agfa Graphics, a division of Agfa-Gevaert N.V., a Belgian-German multinational corporation that develops, manufactures, and distributes analog and digital imaging products. Agfa’s proprietary UV-cured inks are noted for being both eco-friendly and for the adhesion, flexibility and scratch resistance of the cured ink layer’s physical properties.

Additionally, the white ink capabilities on this machine allows us to do spot white, white flood behind clear (for outward facing window projects) and a variety of effects on metal and brushed metal substrates.

BACK TO SCHOOL (ish)!

As Fall approaches, here are some Case Studies in the “Back to School” spirit. Figuratively if not literally… 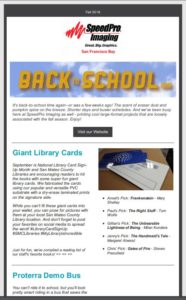 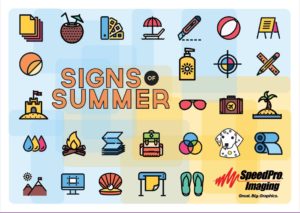 No one can deny that the dog days of summer are upon us. Signs of the season abound: barbecues, baseball games, beaches and boarding passes.

Call us about our summer specials!

Traversing the length of the entire 2,600 foot San Carlos Airport runway before continuing through the beautiful wetlands on Bair Island, then returning and concluding at the Hiller Aviation Museum, the “Runway Run” is one of the most interesting and beautiful running, jogging, and walking experiences in the Bay Area.  SpeedPro’s production studio is right across the 101 freeway from the museum and since they’ve been such a great client for years, we were happy to once again Sponsor this event at the Explorer Level. For information on this year’s run, check out their site.

The Hiller Aviation Museum adjacent to San Carlos Airport hosted the first annual “Runway Run” 5K/10K, and the SpeedPro center in San Carlos, CA was pleased to be one of the many community sponsors who supported the event. The course allowed participants the opportunity to run, jog or walk along the airport’s runway which had been closed to air traffic. The course continued south into Redwood City and looped back to the museum where food and music awaited the finishers. Check out the video shot by GoPro from a remote drone.

Paul Reinhardt, President and co-Owner of the SpeedPro studio in San Carlos, CA was recognized with a newly created honor at the 2017 SpeedPro National Convention in Denver – the Ambassador Award. This award is given “in grateful appreciation for consistent demonstration of goodwill toward fellow franchisees”.

More stories of unique wraps and site marketing innovations. From a “pop-up” experience hosted by KLM Royal Dutch Airlines to wrapping a charity RV, SpeedPro in San Carlos has been gettin’ around.

ONE YEAR ANNIVERSARY OF OUR “MOVE AND GROWTH”

Whew! It’s hard to believe that it’s been a year since SpeedPro outgrew its former facility and moved a mile up Industrial Road in San Carlos. Our new space is more than 60% larger; providing additional office space for our growing staff, production areas for our Kongsberg cut/rout table and second lamination station, a separate vehicle install bay and loft storage for our exhibit inventory. And the new kitchen area rocks!

SpeedPro / San Francisco Bay (located in San Carlos, Ca) was recognized with several awards at this year’s National Convention of the SpeedPro system, held in Clearwater Beach, FL. For the second year in a row, it was honored as one of the four top-earning studios. In previous years, the San Carlos center has been inducted into the President’s Club and received awards for Superior Growth and Outstanding Corporate Contribution for efforts on behalf of others.

Throughout the Bay Area – in Burlingame, Menlo Park, San Mateo and San Francisco, SpeedPro has been printing and installing graphics on walls, windows and “wheels”….click here for the newsletter

Pump toppers, hose hangers and nozzle talkers – they’re not only for Dr. Suess anymore. Those are actually items we print regularly for one of our favorite clients, Propel Fuels….click here for the newsletter

SpeedPro / San Francisco Bay (located in San Carlos, Ca) was recognized with several awards at this year’s National Convention of the SpeedPro system, held in Denver, CO. The Bay Area center was one of three studios honored at the first President’s Club, and was also presented with awards for Superior Growth and Corporate Contribution Appreciation for efforts on behalf of others.

History has witnessed many great journeys. In 1804 Lewis and Clark trekked across North America. In 1919, Charles Lindbergh piloted the first transatlantic flight. And in 2015, SpeedPro made the great 1.1 mile journey down Industrial Road. While our journey may not compare in terms of distance, danger, or grandiosity – moving three delicate printers weighing in at 23,000** pounds collectively, hundreds of rolls of various media, sheets of substrates, finishing supplies, 6 offices, and an entire kitchen

Delivering sandwiches, salads and delicious fresh-baked goodies is big business in the busy Bay Area. Several local bakery-cafés have recently expanded their fleets of catering vans, and they’re turning these trucks into rolling billboards with the help of full coverage “vehicle wraps.”

SpeedPro, a San Carlos based provider of vehicle wraps and premium display graphics has seen a surge in food-related projects in the past year. “We’ve been fortunate to work with some great brands like Whole Foods Market, SPUD.com, and Boudin Bakery Restaurants,” said Paul Reinhardt, Speedpro’s president.

C.G.
San Francisco, CA
Very high quality printing. Talented staff.
Report a concern
L.G.
Palo Alto, CA
Always great! Thank
Report a concern
Julie Garrett
Daly City, CA
This is my third time working with SpeedPro, and in every interaction they have exceeded expectations in effort, schedule and quality. Responsive, creative and fun.
Report a concern
Ingrid Rivera
to follow
Services we great. Placed an order near my hotel. They were able to provide quick service and delivered to our hotel with no issues. Highly recommend. Customer service was excellent.
Report a concern
Richard Schwartz
San Mateo, CA
On time - on budget, great customer service!
Report a concern
Manuel Ortiz Escamez
Redwood City, CA
Your speed and professionalism! You honor your name.
Report a concern