As most are gearing up for the long 4th of July weekend with barbecues, fireworks, and beach attire, we’re steady busy here at SpeedPro East Bay getting ready for Alameda’s big 4th of July parade!

Alameda’s parade is “one of the largest and longest Independence Day parades in the nation. With over 170 floats and 2,500 participants who travel a three-mile route…” according to their website and this year, we get to be a part of that fun.

SpeedPro East Bay is going to take part by joining forces with our friends at Island Print Express and show off our flawless printing skills. 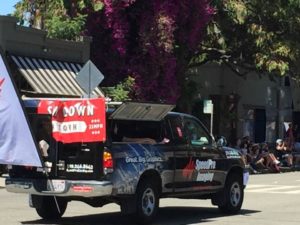 With our specially wrapped SpeedPro truck in route (pictured below) we are sure to be seen.  We will embark on this 3-mile trail while passing out bumper stickers for the adults and candy for the kids.  The bumper stickers will be promoting the drive 25 campaign that Alameda is working hard to enforce.

Most of Alameda’s areas have a strict 25 mph driving limit and more recently the reckless fast driving is becoming a problem.  So with the help of Island Print Express, we hope to spread awareness while also showing the awesome things we can print so Alameda residents can take this with them and help spread the word as well.

Check out our social media sites to see us in action on Monday, July 4th.